Open Government: The global context and the way forward

Involve has contributed a chapter – “The role of citizens and civil society in open government reforms” – to a new OECD book – Open Government: The global context and the way forward – launched at the 2016 Open Government Partnership global summit in Paris.

The report provides an in-depth, evidence-based analysis of open government initiatives and the challenges countries face in implementing and co-ordinating them. It also explores new trends in OECD member countries as well as a selection of countries from Latin America, MENA and South East Asia regions. Based on the 2015 Survey on Open Government and Citizen Participation in the Policy Cycle, the report identifies future areas of work, including the effort to mobilise and engage all branches and all levels of government in order to move from open governments to open states; how open government principles and practices can help achieve the UN Sustainable Development Goals; the role of the Media to create an enabling environment for open government initiatives to thrive; and the growing importance of subnational institutions to implement successful open government reforms.

Involve’s chapter highlights the involvement of citizens and civil society and their critical role in developing, securing and implementing open government reforms. Based on the findings of the OECD survey, the chapter analyses the opportunities for civil society to shape open government reforms, its current practices and challenges. It further outlines civil society’s forms of contributions to advance good governance and assesses the enabling environment so that their contributions can have a lasting impact on improving policies.

There are also some common issues reported with the quality of this engagement – such as governments failing to provide a clear process and timelines, advance notice, or awareness raising – that weakens its effect. This engagement is also taking place in the context of a general trend of declining civil society freedom around the world. While governments may be giving nods towards engagement through mechanisms they create and control, this is seriously undermined if they are simultaneously closing civic space.

Upon the foundations of a thriving civil society and a constructive state-society relationship, good engagement principles and practice can be applied to involve citizens and civil society in developing and implementing open government strategy. But beyond this, reformers inside and outside governments must form partnerships and build broad coalitions to achieve change, including through mobilising, supporting and engaging with citizen movements.

Read the report in the OECD Library

Our thinking
Back to top 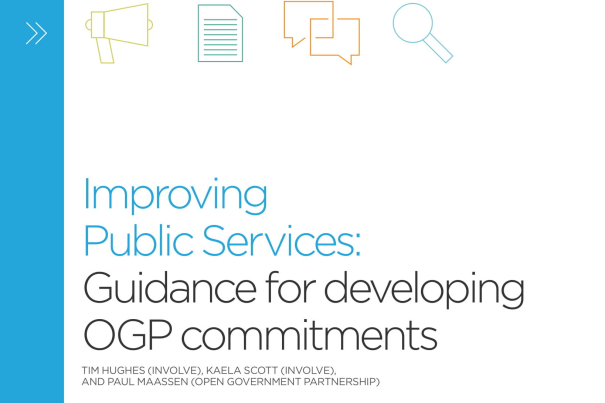 As citizens, we rely on public services being accessible and high quality – to give us an education, keep us healthy, make our communities a safe…
See More