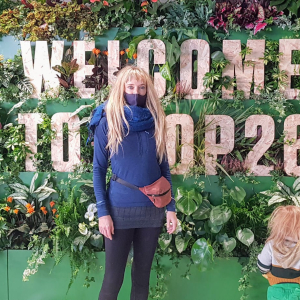 Ellie, a member of Scotland's Climate Assembly reflects on her experience being part of the process, and what they have done since. The assembly met for seven weekends from November 2021 - March 2021 and will be reconvening early next year to consider their next steps after hearing the Scottish Government's response to their recommendations.

It’s a year on from my becoming a member of Scotland’s Climate Assembly, it’s been 5 months since we submitted our recommendations to the Scottish Parliament, and I have also been involved in presenting questions regarding our recommendations to MSPs, cabinet secretaries and the First Minister - to which, I have been greeted with hopeful replies but also sentences like ‘it is a matter of balance’.

From the evidence we were given by the expert panel on the SCA it was clear to many of us members that the balance has now been tipped so far that we need to make drastic system changes in order to bring us back off course from the climate catastrophe. We worked hard and put our hearts and souls into the recommendations.  We are currently half way through the time that the Scottish Government has to respond; we wait with baited breath until that date in December.

Meanwhile, the UN Secretary General calls the most recent IPPC report “code red for humanity”, COP26 comes to Glasgow, and I experience first-hand the effects of climate change following extreme flooding at my home in the Scottish Borders where I find myself swimming around the trees in my front garden! 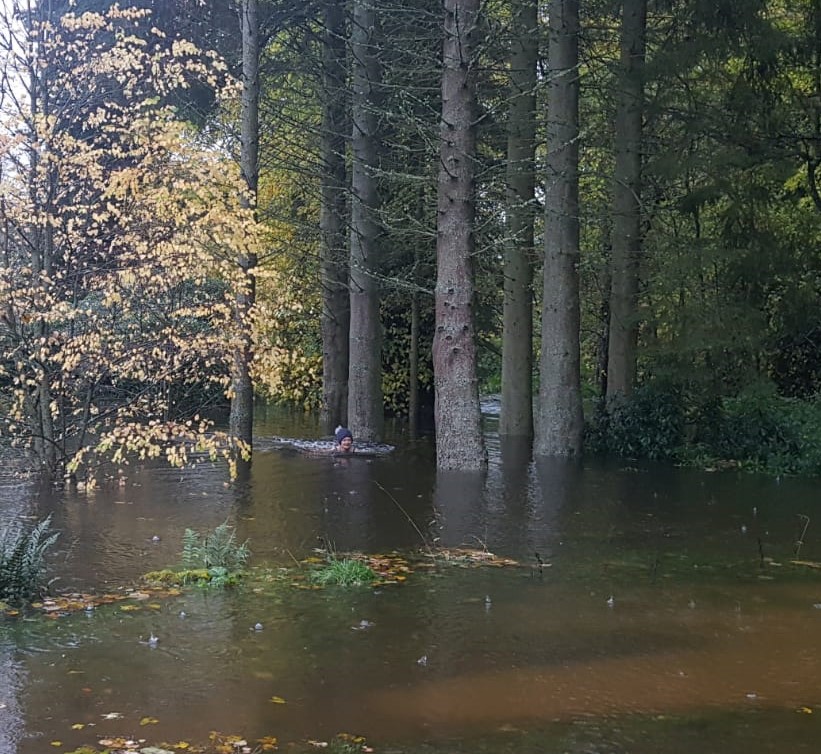 The Universe seemed to be pointing me in the direction of a call to action.  So, my family seized the moment, painted a banner with the words ‘System Change not Climate Change’, and went in our campervan with our wee two-year-old for four days to COP26, to see the conference of the parties in action.

On arrival, I, like others, felt disenfranchised from the talks continuing in the Blue Zone between our sleepy leaders acting under the influence of the big profit driven exploiters of the world. The UK government has allowed sponsors and partners of COP26 to be the likes of Unilever, car companies and supermarkets displaying a host of greenwashed promises in the Green Zone trade show stands. Seeing this firsthand reinforced my doubt that the decisions being made in the Blue Zone were not going to be enough.  Food and land use were not even on the agenda.  From the evidence presented to us as SCA members, this omission is, in my opinion, similar to smoking not being on the agenda of a lung cancer conference.

The capitalist economy and culture of excessive materialism cannot continue. Carbon offsetting and carbon capture technologies to me seem like an excuse to justify the continuation of destructive practices and gives us false hope. We cannot buy our way out of the climate crisis, we must change our habits.

If world leaders are falling asleep, not turning up or just reciting hollow rhetoric and lies; if we can’t rely on our leaders, then who do we turn to? I felt ready for the Saturday global march with a shifted energy and realisation that we need to do this for ourselves.

Heading to the streets and joining the Saturday march was a great antidote. We held aloft our banner and joined more than a hundred thousand other people from around the world to march for climate justice. 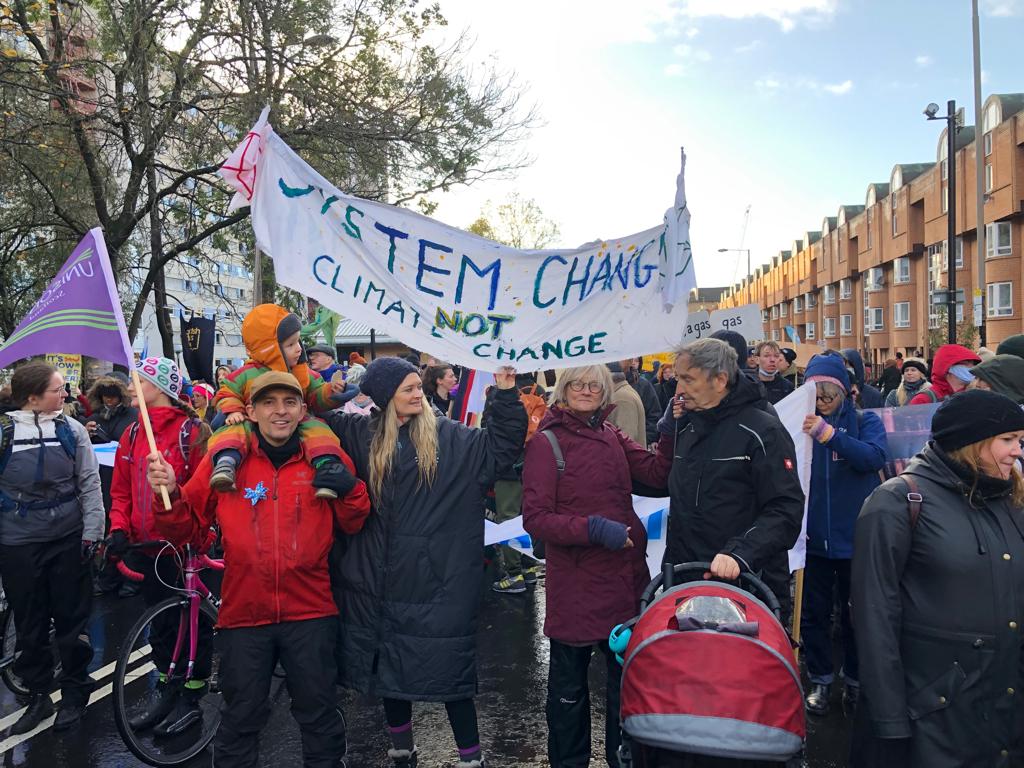 We felt the collective drive for change with music, song, banners and costumes surging through the streets of Glasgow from Kelvingrove through heavy rain, sunshine, wind and rainbows and gathering at the end of the march at Glasgow Green to a festival vibe greeted with meals from the Hari Krishnas. Turning inwards to ourselves, deepening community and deepening our humanity seemed to be the powerful answer for me.

For the next few days we joined numerous COP26 coalition fringe events: talks; theatre performances; discussions; workshops; exhibitions; sermons; short film screenings; and a community feast in the recently declared Free State of Govan!  Our wee two-year-old had experienced the full spectrum and was ready for home comforts and in particular a bath…  What a wealth of knowledge and wisdom sharing we gained and what an incredible opportunity to only have to travel an hour from our home in the Scottish Borders to a United Nations conference!

But would I ever have considered doing so before participating in Scotland’s Climate Assembly? Maybe, but certainly my experience with the SCA gave me more confidence and gusto, and a sense of duty of service, of the civic responsibility we all have to contribute to our shared future.

But would I ever have considered doing so before participating in Scotland’s Climate Assembly? Maybe, but certainly my experience with the SCA gave me more confidence and gusto, and a sense of duty of service, of the civic responsibility we all have to contribute to our shared future.

I believe we can do this, I feel inspired and hopeful.  Hopeful of the transition I can make for myself spurred by the energy of the human collective, the raising of the vibration of the marchers in Glasgow on Saturday, the people, the youth and in particular the wisdoms of the indigenous peoples of the world who travelled to share their wisdom in Glasgow.  Indigenous people are the ancient knowledge holders now and need to be brought to the front line of decision making.  They know what we have forgotten and how we can heal our relationship with nature.

Now the talks in the Blue Zone are over, it is the words of the wonderful young indigenous Alaskan activist Ruth Miller (Whirlwind) which resonate in me still:

“Decolonize yourself, break yourself free from the shackles of this broken system and deepen your humanity.”

Ellie is a member of Scotland's Climate Assembly. She lives in the Scottish Borders with her family, including her two-year old daughter.

Views of blog contributors are their own and do not represent Involve's position. 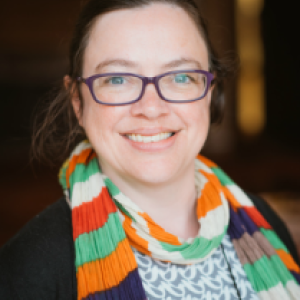 Scotland's Climate Assembly: a year on