Democracy in flux: Reflections on a decade at Involve

Today is my final day at Involve, which naturally brings with it a time of reflection after 11 years spent at the organisation, and five years of leading it.

It feels like an impossible task to boil my thoughts down to a reasonably lengthed blog post, but here is at least an attempt to do so. 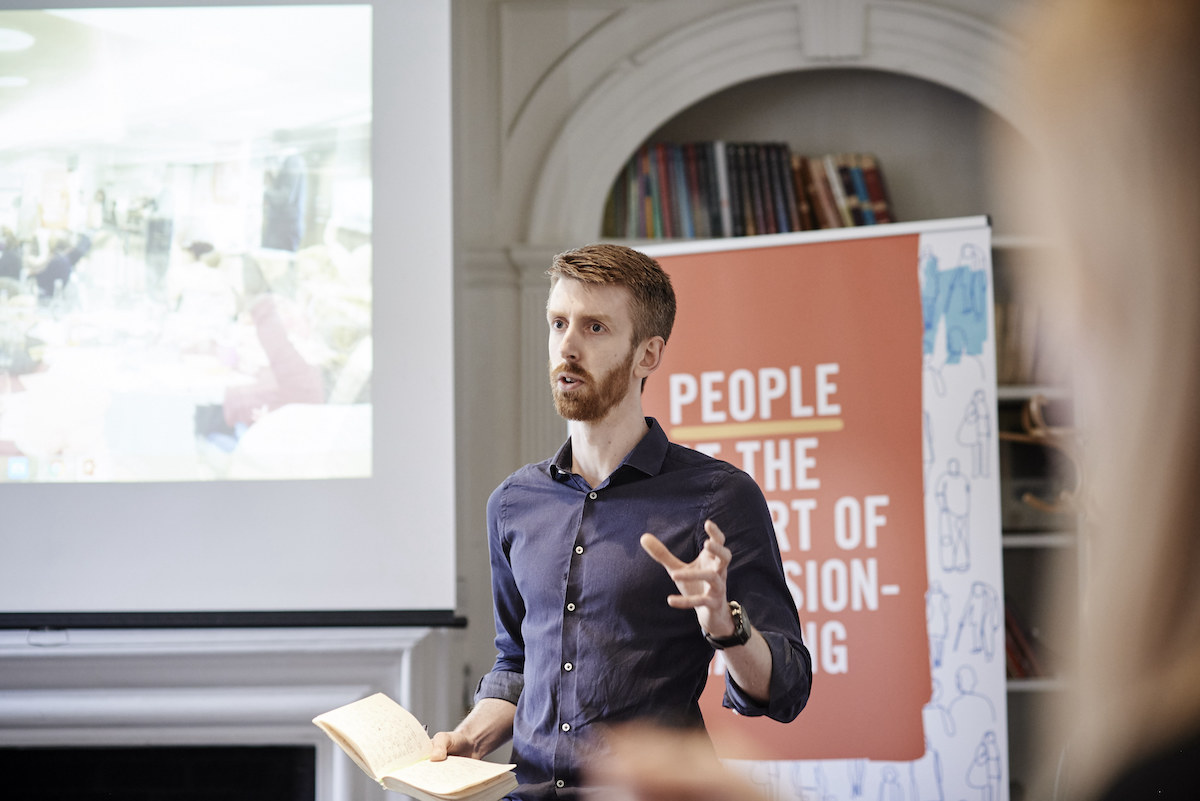 Leading Involve over the past five years has brought with it a certain amount of dissonance – between the threats to democracy we see in the wider world and the opportunities for democratic renewal that we have been privileged to work on.

Since 2017, we have run over fifty projects across the UK – with national, devolved and local governments – that have involved the public and civil society in policy making on topics including climate change, democracy, hate crime, health and social care, mental health, and science, technology and data. Some of these have brought a high profile – Climate Assembly UK, Scotland’s Climate Assembly and MH:2K, to name a few – while others have worked quietly in the background. All have made a difference to the people involved – members of the public, politicians and officials alike.

Alongside these practical projects, we have pushed for new approaches to democracy that would update and revitalise our democratic institutions for the 21st century; built networks of practitioners and public servants to develop and improve the practice of public participation; and increased understanding of participatory and deliberative democracy across institutions and the public.

While we feel we have taken some significant strides forward in introducing and building support for new ways of doing democracy, this has taken place during a time that UK democracy has been in a state of turmoil (at best) and decline (at worst).

It would be no small understatement to say that the past decade has been a time of significant democratic change and turmoil.

As I joined Involve in January 2011, the UK was eight months into the Conservative-Lib Dem Coalition Government, which itself was a significant shock to the norm of majority governments since 1974. The subsequent years saw a failed attempt at electoral reform, the “Big Society” agenda and a programme of austerity, the latter resulting in the closure of a large number of democracy and community organisations across the country.

2016, of course, changed a lot. The EU referendum by some measures was a great democratic moment, with the largest number of UK voters in over two decades choosing to exercise their democratic will on an issue of national importance. But in other ways, it revealed and exacerbated many of the shortcomings of our democratic system. As we wrote at the time:

The lead up to and aftermath of the referendum vote revealed a broken politics and society – marked by uncivil debate; scare tactics; misused “facts”; ad hominem attacks; broken political promises; voters cast as stupid, incapable and irresponsible; judges branded as “enemies of the people”; rejections of the result; attempts to silence opponents; trolling; hate crime; and a return to behind-closed-doors decision making.

I took over as director of Involve six months following the referendum, in January 2017. My first week also happened to coincide with Donald Trump’s first week as President (no further parallels need be drawn). It felt like a time of significant threat for democracy, but also potentially a time of opportunity to create something better.

As we grappled with what this meant for Involve, I wrote to our trustees at the time:

The events of this year are the consequence of long term economic, political, societal and technological changes, which have built in pressure below the surface. In other respects, though caused by long term trends, the events of 2016 have themselves fundamentally shifted the tectonic plates. We are experiencing a period of disruption to the order that, on the one hand, presents the opportunity to build a democracy fit for the 21st century, and on the other, poses a profound challenge to the very continuation of liberal democracy. How the pieces come to rest are likely to define our society for decades to come.

This disruption – and the challenges and opportunities it brings – has been largely borne out over the years since.

Beyond the evident turmoil in our democracy, over recent years there has been a very real sense that democracy is in decline. Far from the “End of History” as Francis Fukuyama famously predicted, there has been no shortage of books recently published foreshadowing the end of liberal democracy.

The past five years have seen many of our democratic norms be thrown into question and controversy. At Westminster, this has included the continuation of hostile and uncivil debate, attempts by the Government to sideline Parliament, a lack of ministerial accountability for significant failures, the deliberate spreading of misinformation, and scandals involving cronyism and corruption. In Northern Ireland, we saw the collapse of the power sharing agreement in 2017, suspension of Stormont for three years and continued instability since. And Scotland has faced its own challenges with the dominance of one party and political scandal.

Most recently, the UK Government is seeking to pass bills that threaten to weaken core aspects of democratic participation and accountability. The Elections Bill will introduce mandatory photo ID that could disenfranchise millions of voters; remove powers from and undermine the independence of the Electoral Commission; and give Ministers fresh powers to restrict the activities of charities and campaign groups. At the same time, the Policing Bill will significantly weaken and limit the right to protest, which plays an essential role in giving voice to people and issues, and holding institutions to account for their actions.

But while there are significant threats to democracy to be concerned about, my time at Involve has given me many reasons to be hopeful.

Despite – and perhaps to a large extent because of – the challenges we have witnessed to democracy, the past few years have seen a huge interest and energy in different (and better) ways of doing democracy. The “deliberative wave” is one manifestation of this, with, for example:1

Beyond this deliberative wave, the past few years have also seen the emergence of significant social movements – from Black Lives Matter to Extinction Rebellion – campaigning for rights and the redistribution of power in society. And Covid manifested an upswell of mutual aid and self-help groups, as well as new approaches to engaging the public by some forward thinking organisations, that illustrate the possibilities of a more democratic world.2

In the face of democratic turmoil and decline, there has been significant opportunity for democratic renewal and I’m enormously proud of our contribution towards revitalising democracy over the past five years. But there is no doubt that it is an unfinished project. The interest in citizens’ assemblies has opened up the opportunity for a wider conversation about the role of the public in decision-making, but there is still a long way to go to build widespread understanding of the different approaches, methods and tools for engaging citizens. And while we’ve made significant progress towards increasing and improving the practice of participatory and deliberative democracy, more work needs to be done to translate it into long term sustainable changes to our democratic norms and institutions.

And therein lies my main learning from the past 11 years: that democratic renewal is necessarily always an unfinished project. There is a need to continually review and update how we are governed – and how we govern ourselves – to respond to changes in society and ensure that democracy works for everyone. However, too often the process of reforming our democracy is captured by those with money and power, and takes place in a piecemeal and partisan way.

Looking ahead, involving the public in this process of democratic renewal is – to my mind – the big challenge and opportunity that lies ahead for those of us who care about defending and improving our democracy. The threats that exist to democracy will only be countered if there is widespread support and engagement with democracy. And we can only hope to build a democracy that works for everyone if it is an open and collective process. In short, democracy needs a movement. This is why I am particularly pleased that Involve has been entrusted with the responsibility of establishing and running the Democracy Network.

So, as I depart Involve, I do so with some trepidation, but also a great deal of hope for the future of democracy. At its heart, Involve is a glass-half-full kind of organisation, with optimism for the opportunities that lay ahead to create healthier, more vibrant democracies that are fit for the future. I have been privileged to work with many amazing people who have inspired me and shown me what’s possible, and one of my biggest points of pride from my time at Involve is the fantastic team of passionate people that we have been able to build. I’m excited to see how they take forward the work of putting people at the heart of decision-making.

And, for my own part, I’ll be continuing to work towards democratic renewal in other ways. Hopefully more to say on that very soon.

A new chapter, a new author: Changes at Involve

As one exciting chapter draws to a close at Involve and a new one begins, I’ve decided to step down as director this summer. Here’s what lies ah…
See More
NewsTim Hughes

Power to which people?

One of my final acts as director of Involve has been to take part in a Radio 4 documentary, which asks the question: "Power to which people?" The…
See More
NewsTim Hughes

Available Now! Democracy in a Pandemic: Participation in Response to Crisis

Democracy in a Pandemic: Participation in Response to Crisis, a new book by Involve and the Centre for the Study of Democracy at the University of W…
See More